Remember that Pebble I was talking about the other day? Well despite the fact that half the time the display looks like this:

I’ve managed to compile and run this: 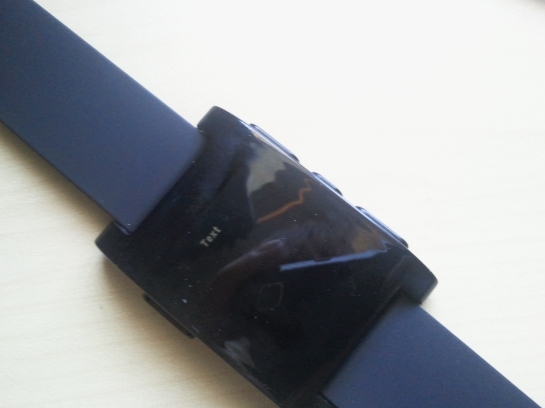 The key to being able to use the screen is to hold the Down button quite hard… But unfortunately this isn’t always practical, like when I want to use the Down button repeatedly on a list. I have contacted Support but have yet to receive a reply…

But in the meantime I can keep writing watchfaces, just can’t use ’em.

But what if we wanted to change it? Well, here’s how you’d go about it:

Now to work on some other ideas I’ve had…

Today is an exciting day. Why? Because I played a game with someone in Germany.

Why is this exciting you may ask? Good question. It wasn’t just any game. It was a ‘game’ I wrote! That makes it special, even if it is just moving a red circle around.

When another red circle appears with another player’s name above it, that circle is elevated beyond mere geometry and into an extension of that person.

How it is moved by that person becomes the first form of expression, beyond any language.

Anyway, dramatics aside, here’s a screenie of me playing against myself. When I have one of a proper multiplayer session I’ll add it:

I am aware that this is a very crude ‘move to target’ system that will only really work in obstruction free scenes. Anything more complicated like an environment made of corridors and squares like ‘dungeons‘ and pathfinding will have to rear its ugly head once again.

But thats okay, because it seems to get easier and simpler to implement each time it comes around.

If you’d like to help me test this, send me a tweet and we can arrange something!

Even though the watch isn’t here yet, I’ve gone and managed to compile a simple watchface anyway. All it does is show the text ‘Text’. I did warn you it wasn’t very exciting!

If you haven’t heard, this is a Pebble Smartwatch. Mine is in the post somewhere between Heathrow and my house… But there is no post on weekends!

Instead, I’ve spent a lot of today setting up the Pebble SDK toolchain and dependencies on a Ubuntu Virtual Machine, and brushing up on my C++ so that when it arrives, I can make my own watch apps!

The fantastic thing about it is that it is completely open, and there are lots of code examples, which I can understand thanks to my tinkering with C and Java.

As a sample of what the community has already achieved, here is John Cleese as a watchface app. Source here.

Working on the server software some more, with some help from a friend, it now accepts up to an arbitrary (currently 10) connections, each one handled in its own thread. When the server manager gets a new connection, it passes the Socket to the new thread, which then handles all the I/O for that connection. When that client disconnects, it sets a ‘in use’ flag, which the server manager can then use to re-allocate it if all the other threads are busy.

Here’s a demo image! I’ll also release some source code for this stage, as a simple proof of concept before it gets too much more complicated.

The next step is to set up server sending messages from one client to another, and become a real server! At the moment its just a listener…

Here’s a link to the source code.

The next step in any game development methodology is investigating networked games, ones that run on multiple computers and communicate to coordinate a shared experience for players. To this end, I started looking into java.net for communicating in Java program. This yielded good results, and after about an hour of tinkering, I can show the fruits of this surprisingly easy labor: 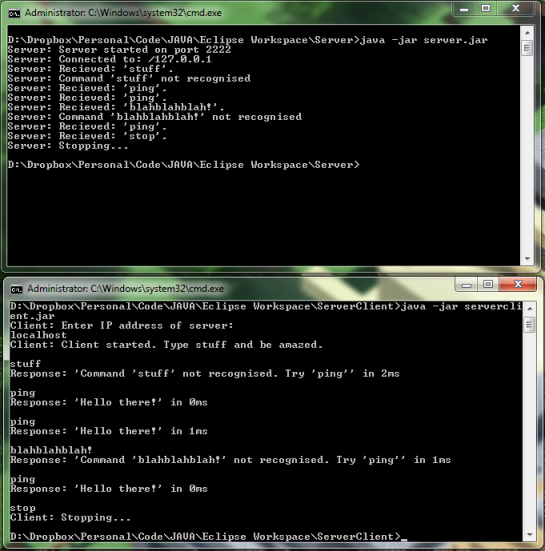 Eagle eyed readers will be able to figure out the chronology of events. Simply, its a brief back and forth, with me entering commands in the bottom window, and the server program on top reporting the reception of these commands. The client also shows the time taken for the round trip. I have tested this on another computer in my local network and it works!

Next step, a networked game! But first I think I should clean up the format of the messages here, as it maybe a tad confusing…

After a misadventure into making my Android game engine threaded for higher performance, (A two threaded app on a single core phone was destined to fail!), I decided to do the same on PC, where multi-core processors are the norm nowadays.

On Android with a single core, the switching between threads contained so much overhead that the performance suffered greatly. However, on PC, it still seems to be good, at least for a simple scene. I’ll see how things pan out as the scene gets more complicated.

Here is a screenshot, with the worker thread limited to 65 FPS, for good measure.

In a moment not quite unlike hearing your programming lecturer has written a debugger for debugging a debugger, I decided to have a delve into Swing and AWT to produce a small tool that would enable me to make better use of Eclipse and the Android SDK’s features.

When I test an Android app, I can see the phone’s logcat of events via ADB (Android Debug Bridge). In the past, this has involved using the Android Dropbox app to download the .apk file generated by Eclipse whenever I click ‘Run’ or ‘Debug’ onto the phone and installing it. For every revision. This didn’t annoy me too much, because I had the Android SDK’s Virtual Device Emulator to test apps. This emulator is very slow however, so I only used it for testing for NullPointerExceptions, which would render the time spent installing a revision via Dropbox a waste of time.

I have recently learned that I can run a new revision directly on the phone wirelessly by using cmd at the Windows Run prompt, then using adb connect address. After doing this, the phone shows up in Eclipse’s DDMS perspective, including the logcat!

Therefore, the only logical conclusion is to make a Java application that can do this for me. Presenting the latest in SELNP (Slightly Enhanced Late Night Productivity) technology, ‘ADB Connect’!

It basically runs the command prompt command for me. Useful, and saves a minute or two. I learned a good deal about Swing and AWT doing it, so time well spent for future endeavours.