By request, I have made an inverted version of the Beam Up watch face:

It’s available now at mypebblefaces, and I’ll add it to the Watch App Selector in due course, to avoid spamming the Play Store with updates. Enjoy!

A while ago I wrote about a prototype watch face called Beam Up. Spurred on by the exciting potential the Watch App Selector now permits, I’ve finished it up.

It is exactly as it was before, but in addition to the predicted digit changes being done off-screen after being ‘beamed up’, there is a slim bar underneath the time display that show 15 second increments towards the minute ticking over, which then retracts fully in time with the digits change.

It’s minimalist, but conveys a lot of information at the same time. I’m not very good at making mockup animated gifs, but here’s a preview anyway of the minute change:

You can get it along with all my others, as well as updates when they occur with Watch App Selector, or get the standalone file here or at mypebblefaces.

Every once in a while programming you get stuck on a problem and you think to yourself ‘There must be an easier way to do this!’, and most often you’ll be right. It’s just a case of casting around for another approach or thinking outside the box. In this case it was for a mini project I’ve been working on for some weeks, on and off. A single free app through which to distribute all my past and future Pebble watch apps and watch faces. I think it’s been done before, but I like elegance of the idea. Problem was, I got stuck on how to best present all the apps.

My main vision was a ListView, but the templates for the individual item layouts were not quite right. So I looked around the internet for how to implement my own, and found conflicting, over-complex or wildly inaccurate resources on how to accomplish this. I left it to sit for a couple of weeks, as I was kept busy by other things, but then yesterday I made another attempt at it.

And as such also happens sometimes when programming, a single lead will take you all the way as you get swept up in the creative process for a several hour marathon. And the end result is this:

This is the first iteration on realizing the idea of a single app to distribute my watch apps and watch faces. It takes the form of a single list, with each app/face given its own title, summary and logo. 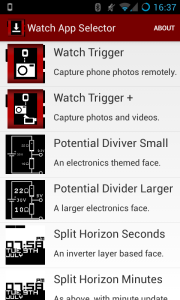 When the user clicks on an item, they are taken to a details Activity with more fleshed out information, as well as applicable buttons for installing the apps.

Thus, when I release some more watch apps/faces (got a couple of concepts in the works at the moment, just need to find the time), I will add them as a list item and release a new version of this app. Simple!

As always, I’m eager for any and all feedback.

I’ve embarked upon my fourth and final year at university, and so a lot of my time is taken up with the course and associated course-work, including a mammoth individual research project.

The good news is that a large part of that project will involve writing software in C++, which I’ve never used before. I have, however, used C so the leap is not too far. Thus over the last week or so I’ve been gaining familiarity with using the OpenCV image processing library and after the initial teething troubles installing and linking the library it looks very promising for what I hope to achieve.

In the free time remaining when I’m not doing other life stuff, I’ve been working on a much more polished GClient using the knowledge I obtained working on Watch Trigger, as well as trying to figure out why zoom isn’t working in a test build of Watch Trigger +. Yet more wresting with the finicky Camera API.